Have you heard of the Milwaukee durable deep cut band saw series? It is a new series of durable band saws that relies on an all-metal gear system to drive the blade rather than the traditional chain system used on other band saws. It is difficult to choose between this new series and Milwaukee’s old M18 cordless series because both classes have high rated band saws.

We usually recommend having both a corded and a cordless band saw in your shop for convenience. In this review, we have given all the details you need to choose the most durable band saws for your workshop from Milwaukee’s large collection.

The deep cut class of band saws is now praised as one of the most durable band saws with the least maintenance requirement because of their gear drive and robust construction. The frame is all metallic while the sides are lined with rubber to reduce shock from knocks and falls. These band saws are also fitted with a clutch that absorbs the shock from the blade. They are also equipped with an 11-Amp motor, more powerful than the traditional 10-Amp motors used on other 5×5 inch capacity band saws.

The series has received lots of positive reviews by contractors and DIYers for living up to their durability expectations. While the Deep Cut Series is highly advisable as the band saw of the future, they are corded limiting you to working close to a power source. We recommend Milwaukee 2729-20 also made with tough external protection as the best cordless band saw for the money. It stands out as one of the most affordable cordless band saws in the market. 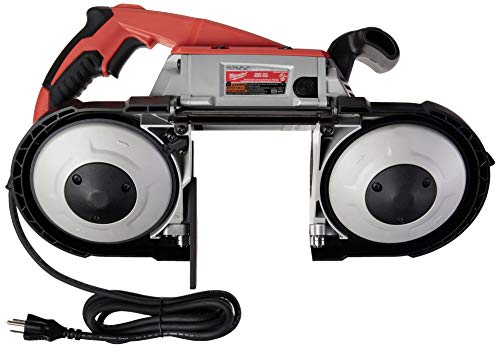 If you are looking to invest in a lifetime purchase, then everything about this band saw spells precisely that. It comes with a blow-moulded carrying case that can carry everything you need on-site. It weighs 14lbs despite its tough body and draws only 11 Amps on a 120V compatible with your regular home plug or extension cable. The band saw is also compact, designed to give you a clear line of view for making accurate cuts each time. It is also fitted with an ergonomic handle to improve your grip.

According to Milwaukee, this portable band saw has twice the lifespan of a standard band saw all thanks to its revolutionary construction. Its entire frame covering the blade and the motor are metallic. Its 22-inch circumference is then covered by hardened plastic and rubber that acts as a shock breaker which prevents damage from knocks and scratches at the job site. Its entire frame is slim with a fused motor housing giving you a clear view of the cut area.

It has an adjustable shoe that can also be locked onto the frame for maneuverability while working. Internally, this band saw uses a metallic gear drive system which is more durable and maintenance-free instead of the traditional chain to a pulley system. It is also fitted with an auxiliary handle for better balance and control.

Variable speed is essential for a high-capacity band saw. This band saw has variable speed settings of 0-380 SFPM which allows you to match the blade speed to the material you are cutting. The band saw has a cutting depth capacity of 5×5 inches which will enable you to cut the largest workpieces a band saw can cut. Its powerful high-speed motor is constructed with thick winding to withstand the needs of a busy workshop.

It is suitable for cutting metal, plastic and lumber, which is why both professional users and homeowners can buy it. It is also fitted with power overload protection that protects the 11-Amp motor to deliver more extended service. It’s other advantage is the trigger lock-off that prevents accidental triggering of the band saw.

This package doesn’t come with a blade because it is a tool only package, but it is better that way because you get to buy it a befitting heavy-duty blade. It accepts a universal 44-7/8-inch blade. We recommend buying it a heavy-duty 18TPI blade for the best service. Its debris removal system runs on both ends of the blade preventing blockages for smooth cuts and long service. It runs on Constant power technology meant to maintain power throughout the runtime.

Q: Does it come with a blade?

Q: Does it come with a carrying case and the blades?

A: It comes with the case but no blades.

The numbering can be confusing, but 6232-20 is the same band saw as 6232-21 except for the blow-moulded case which is not included in the 62320-20 package. This is the best package if you need a durable deep cut band saw on a budget, or you already have a carrying case. The band saw remains solid, suitable for performing the most demanding tasks in the workshop, home or construction site. You will also enjoy the tool-less blade replacement.

For this band saw, Milwaukee uses a rugged frame construction meant to withstand the harsh conditions on the job site. The technology is called the Jobsite Armor protection designed to protect the motor and the blade guiding system from the elements. Its handles are also rubberized for comfort. The main handle is centred boosting your balance plus an auxiliary handle for better control.

Its slim balanced body weighs 14.5lbs designed to reduce user fatigue when used continuously for a long time. It allows tool-free maintenance and blade replacement thanks to the adjustable tension lever. It is also fitted with a powerful LED light that brightens up the cutting area without shadows improving your accuracy.

This band saw uses a universal 44-7/8-inch blade which can be installed without any tools. You just need to adjust the shoe, then flip the blade in or out of the frame. Its blade drive is a metallic gear system which is more accurate and durable than a chain. It is also fitted with a bumper that protects the blade and the frame from damage. It comes in handy when you are cutting too close to the wall.

It allows you to set variable speeds of 0-380FPM, which is suitable for cutting both metallic and wooden material. This band saw is well suited to non-stop performance thanks to its quick heat dispersion that keeps the band saw cool even when used to cut for a long time. Its speed adjustment is also conveniently located near the handle for simple one-handed operation. 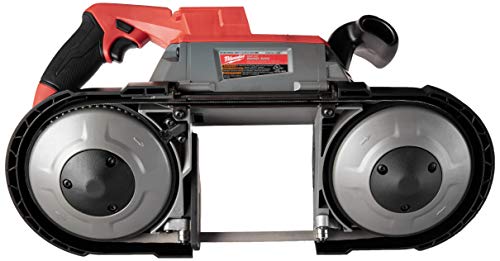 The Milwaukee Redlink M18 series boasts of the most advanced Lion battery technology in the market, which is why this band saw is the best way to go cordless in your workshop. It is a combination of Milwaukee’s high-speed motor and gear drive technology plus powerful 18V motor, all designed to improve your productivity.

This is also a tool only package allowing you to install your blade of choice for cutting wood or metal. It is also built with Milwaukee’s Extreme Protection technology meant to protect your band saw in harsh working conditions.

This band saw features the same tough metallic body of the corded Milwaukee band saws with a slim frame and a fused motor housing. Its battery fits directly into the frame above the primary handle boosting the balance of the saw. Its handle is also centred for balance and fitted with the variable speed button for simple one-handed access.

The other advantage of this band saw is its toolless handling and maintenance feature that makes it easy on the user in the long term. It also has a metallic gear drive technology that is more durable and efficient than the traditional chain system. Its T-handle is static for stability and better control.

It is a big band saw compatible with a universal 44-7/8 x ½ inches. You can use the Milwaukee blades or a third-party blade on this band saw. It uses metallic gears to drive the blade instead of a chain. The blades on this band saw cut fast and smoothly thanks to the blade guiding technology and variable speed adjustments that allow you to match the blade speed to the material being cut.

It is also fitted with a debris removal system on both wheels of the blade. It has an overload protection that prevents overheating and power overload on the motor. The batteries and blades are both easily replaceable.

Q: Does it come with a blade?

Q: Does it come with a carrying case?

Q: Is the motor brushless?

The tough construction technology known as the Jobsite Armor technology is the main attraction of the Milwaukee deep cut band saws. Both 6232 and 2729 use the same construction, making them durable one-time purchases for your workshop. DIYers, however, prefer the corded 6232 packages because of their Constant Power technology that allows them to supply a stable blade speed with little strain on the motor.

The cordless 2729 runs faster than the corded band saw but at the cost of long motor life. Both band saws, however, have the potential of long-term service coming with a 5-year warranty.

The deep cut band saws are both powerful designed to cut 5×5 inches deep through metallic material. Despite their equal cutting capacity, the cordless band saws cannot match the corded models in terms of motor power.6232 delivers stable power and speed for any type of cutting which is why many experts and DIYers recommend it for a mounted benchtop band saw for accurate intricate cuts.

2729-20 and 6232-20 are both tool-only packages that come without a carrying case except 6232-21. 2729-20 is a cordless model which means you may need to buy batteries and a carrying case separately if you don’t have other M18 tools. 6232 is, however cordless and doesn’t require any extra accessories, making it cheap in the long-term.

Deep cut band saws are invaluable in a workshop which is why every feature is essential to the DIYer. The Milwaukee rugged construction, combined with their revolutionary blade guiding technology delivers the most durable band saws for your workshop. This review has all the information you may need to buy the best corded or cordless band saw. We recommend purchasing any of these two band saws as your primary band saw to be able to work anywhere on any material.