Dewalt and Makita are two brands that often go head-to-head when talking about power tools. Fans carry the torch for each brand for a variety of reasons but there’s one thing in common between these two – they have been proven to produce innovative and industry-leading tools.

Makita started as an electric motor repairs company in Japan. It has come a long way and has had many firsts throughout its operation. They created the first battery-powered drill, the first air power tool, and the first Lithium-Ion battery tools, just to name a few.

Part of Dewalt’s beginnings, on the other hand, involved making machinery for national defense. It was the king of cordless drills around the early 1990s. It also launched the world’s first battery that can automatically change the voltage. They don’t settle on the status quo and keep revolutionizing existing technologies.

But what would it drill down to if we put two of their impact drivers face-to-face?

Because it packs a punch across the board, Makita is a landslide winner here when it comes to performance and versatility. However, there is a price to pay for that package and a steep one at that.

For those leaning toward equitably priced options with an equally reputable quality, Dewalt would do just as good of a job for a fraction of the price, especially for not-so-heavy projects.

To know more, please read on. 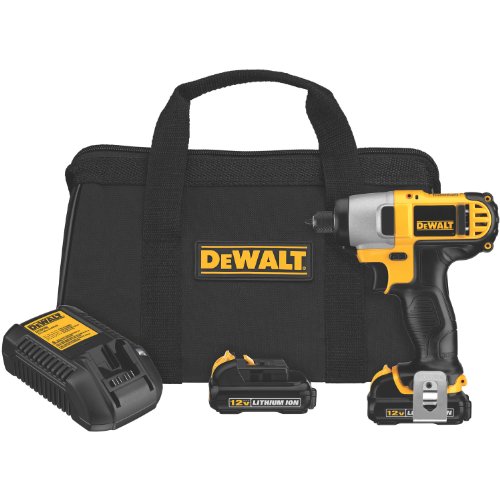 If you wish to go light without compromising power, the DCF815S2 might be just what you need. It has an effective mix of compactness and precision that yields professional performance for light to medium tasks.

The DCF815S2 uses a Lithium-Ion 12V battery system. It has a run time of 1.1 Ah which is relatively low compared to similarly 12V-powered drivers that can deliver 1.5 Ah.

You can expect the battery to fill up in an hour with its provided charger. A maintenance mode setting is available for you to be able to extend the battery life.

Measuring 6.25“ x 2” x 6.5” and weighing 2.2 lbs, it is small and compact to allow comfort, flexibility, and agility. Combined with an ergonomic design and contoured handle, you can easily maneuver your way through overhead and narrow spaces and work for long periods of time minus the discomfort.

It is fitted with a variable speed trigger with a 0-2450 rpm (no load) range. The max 950 in-lbs torque allows you to work through hardwood without screw-head stripping.

This is perfect for light projects but could still work for tougher ones, albeit slower.

Verdict on the Dewalt DCF815S2

Homeowners and semi-professionals would love the Dewalt DCF815S2. It’s ideal for routine repairs and simple construction. And because it’s lightweight and well-balanced, just about anyone can use it. 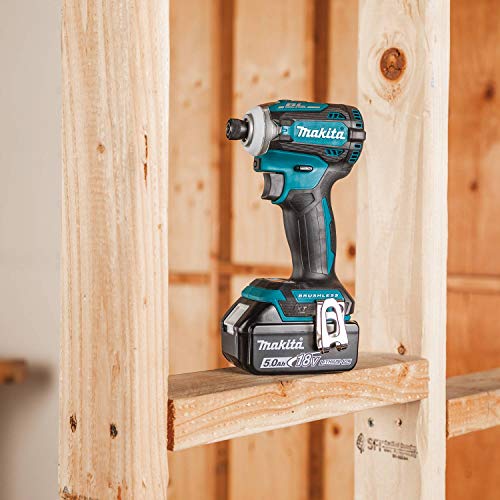 Due to its brushless motor, the XDT16T runs cooler, can give more power, and demands less maintenance.

It operates on an 18V LXT Lithium-Ion, 5.0 Ah battery. Makita’s 18V LXT batteries are arguably the fastest charging batteries which can fully charge within 25 minutes. It sits less on the charger so that you can be more productive.

It measures 6” x 17” x 13” and can weigh up to 4 lbs. It is one of the most compact and lightest 18V impact drivers. Weighing and measuring the way it does, you can use it in tight spaces and work for longer without any added strain.

Although not at the upper ranks of 1,800 in-lbs torque and above, it still has a significantly powerful 1,600 in-lbs torque. It offers a max 3,600 RPM and also has 4-speed modes to address different types of tasks:

Verdict on the Makita XDT16T

The Makita XDT16T delivers more torque in practice than what’s shown on print. It actually ticks a lot of boxes on what to look for in an ideal impact driver which makes it one of the versatile drivers out there.

Dewalt vs Makita: Which is Better?

Based on the details we broke down earlier, it is clear that the Makita XDT16T is on a league of its own, or at least for this review. It outclasses the Dewalt DCF815S2 in terms of speed and torque. Since Dewalt offers less speed and torque, it is not really cut out for highly demanding projects.

It may not be quite fair to pit the Dewalt DCF815S2 against the Makita XDT16T when it comes to battery power as they are in totally different domains. While it lags behind in its battery class, the Dewalt DCF815S2’s single charge can still produce a decent amount of work.

Both offer a comfortable grip and allow to get to hard-to-reach spaces because of their size. Dewalt, being the smaller one, can probably get to tighter spaces.

Price-wise, the Dewalt DCF815S2 may appeal more to the general population.

Deciding which one to get boils down to what you’re going to be needing an impact driver for. If you have heavy tasks up ahead and a hefty price is not going to be a problem, you can go for the Makita XDT16T. If you’re just up for light to moderately challenging tasks, Dewalt DCF815S2 will serve true to its purpose.