After years of pioneering tools on a standalone basis, DeWalt has begun innovating on the interoperability of its different product lines through the Max XR system beginning 2010. Aside from upgrading each of their power tools with better-looking form factors and motors, DeWalt also created upgraded battery lithium-ion battery packs that can fit and power different sets of tools.

If you figured that you need to sand the surface of a wooden bar after mounting it with screws, you only need to put your 20v 4 AH MAX XR li-ion battery pack from the DeWalt impact drill onto a DeWalt MAX XR sander. It’s that easy.

Of course not all power tools sets are made equal, even if DeWalt made them and even if they both sport Max XR technology. It’s why we’re reviewing the DeWalt DCK299M2 and the DeWalt DCK283D2 for you in this article. Please read before our review before buying.

The DeWalt DCK299M2, on the other hand, gives users more power and torque and a few slight improvements that discerning power users will notice once they push the trigger on the tools. 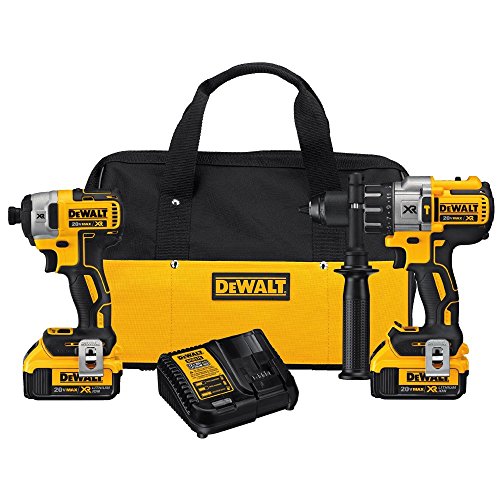 The 4.0 AH battery you’ll find in the DeWalt DCK299M2 toolset will meet the power requirements of larger power tools in the Max XR family like the sanders. You can go beyond just using hand tools with this battery and take on bigger and meaner jobs with more powerful tools with this one pack.

The DCD996 hammer drill revs up from 0 to 2000 RPMs to quickly insert those screws onto project material while the DCF887 impact driver winds up to 1,825 in-lbs of max torque while working from 0 to 3,250 RPMs. The driver makes 0 to 3,600 impacts per minute, delivering perpendicular force around the screw.

Users can set the DCD996 LED lighting on 3 modes to meet the visibility challenges of the project surface. The lights provide 20 times more illumination than any of DeWalt’s prior hammer drill models.

Avoid working with the hammer drill in the dark. Make sure you have a bright light placed overhead instead of relying on the tool’s LED light. 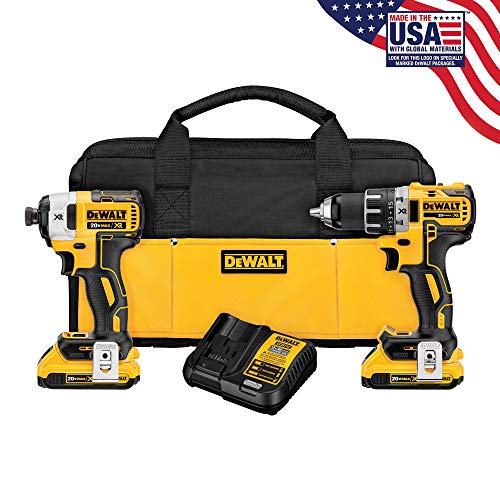 The DeWalt DCK283D2 boasts of a brushless motor, that not only prolongs its operational life, it also increases the runtime of the machine by as much as 57%. Since there are no brushes causing friction inside the motor, the energy it generates runs without resistance for longer operation time and less battery drain.

The 2 AH battery packs that come with the DCK283D2 power tools set possess increased energy efficiency over other power tools batteries in the market. They can last 33% longer than their competitors.

Both the hammer drill and the impact driver measure less than 7-inches front to back with each tool weighing less than 5 lbs. You get tools that’ll go to narrow spaces where you need to fasten a screw.

The impact drill develops a wobble over time that may compromise the durability of bits.

Users need to make sure they’re using the impact drill for fasteners since the wobble may just be a natural feature of impact drills in general. Impact drills produce torque intermittently unlike a regular drill.

The DCK299M2’s power and performance trumps that of the DCK283D2’s, allowing users to drive those screws faster and make those pilot holes in a jiffy. It’s a good trade-off between performance and cost since the DCK299M2 also sports the brushless motor of the DCK283D2 thereby guaranteeing it a long life as well.

It also helps that the DCK299M2 comes with not one but two 4.0 Ah batteries. The DCK283D2 only has a pair of 1.3 Ah batteries that’ll serve the needs of hand tools but not the bigger ones. Basically, the plug and play value of the DCK299M2’s li-ion battery packs are more robust. You only have to buy bare tools next time instead of buying ones with battery packs, making the cost of investing in other DeWalt tools cheaper.